probkin01 jan 2018
RU340101-1010
Hello from Samara's amateur archeologists! This artifact had been found five years ago in Samara, in an old house that was built before the Revolution. During the fall of 2017, this cap became a valued item in the crown cap collection.

I think this relic is probably not newer than 1924, and it may even go back to the times of the Tsars. The triangle with 'VF' in the middle was the logo of the founders of the Zhigulevsky Brewing Company, Vakano and Fabe and served as the official emblem sign of this brewery through the entire pre-Revolutionary period. After the Revolution, the sign reappeared in 1923-1924, when the children of Vakano and Faber became tenants of the factory during what is known as the 'New Economic Policy' (See NEP).

I learned more about the use of this particular logo during the NEP era only this last fall, when I found a unique label of the Zhigulevskiy Brewery ('Br. Vakano, Boyarskiy and Faber') showing exactly the same logo as the one on the cap we are focusing on. 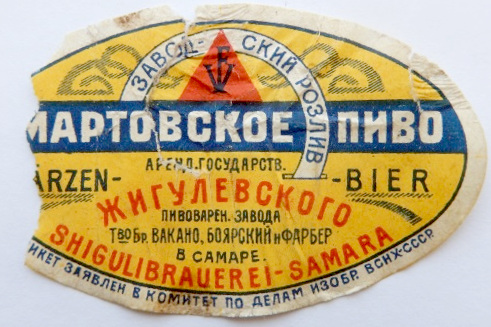 All other known beer labels from the NEP period have a different logo: the 'VF' in triangle was replaced with 'Ж' (the first letter of the beer brand Zhigulevskoye = Rus: 'Жигулевское'). We cannot say why this change was made. Perhaps Boyarskiy objected that his initial was absent in the logo, or maybe the new Soviet officials didn't want any initials in the logo of a nationalized factory. At any rate, the logo had been changed in 1923. Thus the main evidence for the tentative date estimation as pre-1924 is the logo.

But is it possible the cap was actually produced before 1917, or even before 1914? This would be the result of prohibition of alcohol in the Russian Empire.

Now let’s look at the cap itself. It specifications are as follows: it is steel, embossed, with twenty-one teeth and a cork composite sealing. As we know, the crown cap was invented in 1892 in the U.S.A. But American caps originally had more teeth, and, more importantly, they were colored not embossed, or else they were simply bare metal without picture at all. In any event, Vakano would not order crown caps in U.S.A. but would get them in Europe, because most of his business contacts were there.

Unfortunately, I have no information about the beginnings of crown cap production in Europe, but embossed caps were typically used in Germany, Italy, and elsewhere. Also, I don't know exactly when there was a transition to using twenty-one teeth, as different sources cite different information. But I can say for sure that using cork composite (substituting it for solid cork) for sealing started around about 1910. 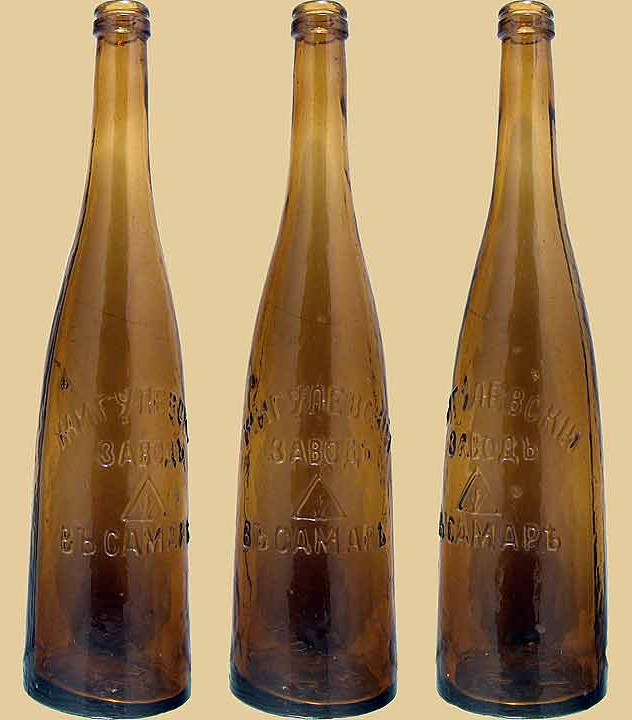 Another factor is the shape of the bottle top, which is likely one designed for crown caps. The bottle is from the pre-Revolutionary period. At the same time, the bottle is ideally suited for capsules, or for caps patented by A. Krigsmann from Riga; these were also available from the Zhigulevskiy Brewing Company. See the reference below for more on this topic. 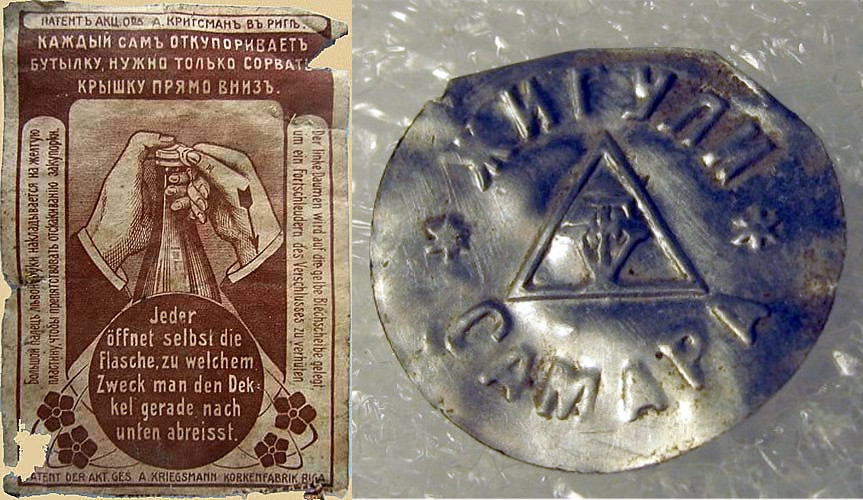 There is no clear evidence of the use of either crown caps or Krigsmann caps in the brewery archives, and we also have the bottles at the moment...

My critics say that crown caps were referenced in official documentation (GOST) only during the 1930s; The “Zhigulevskoye” brand (Rus: 'Жигулевское') appeared during the mid-1930s.

However, before being published in GOSTs, crown cap production might have become a systematic process, but this cap likely was an individual order somewhere abroad.

Now let's explore the possibility that this crown cap was being produced after the NEP. In the brewery archives there is no information about this topic, even though the archives quite rich. We might conclude, then, that the cap could have been created for one of the anniversaries, but it is strange that there is no date at all on the cap. Technologically, it certainly was common to get this kind of cap – steel with embossing ; indeed, many other breweries employed similar caps till the 1990s).

On the 50th anniversary of the brewery in 1931, it's hard to imagine that a triangular logo with the initials of tenants was passed by Communist Party censors. This was a time of industrialization in the USSR. By now the last private enterprises had been nationalized.

The next big anniversary was at 75 years, 1956. This too is a period from which modern collectors have not so many caps. (This was unlike the future 1970s and 1980s anniversaries, from where we have many different caps from Kuybushev, the Soviet name for Samara. If so, this cap was not so old: if it was, most likely it would have been known to collectors, not a rarity.)

Beer labels are a more representative kind of collection in Russia. Many labels came down to our time from all periods. Examining numerous collections and the beer label database of V. Zyazin doesn't bring out any evidence of the triangular logo of Vakano, even in the anniversary years.

Moreover, there no other cases of old pre-Revolution logos having been used on beer labels. The author of the catalog of Soviet and Russian Empire beer labels concurs with that. Nevertheless, we can't 100% true exclude this possibility.

So, putting all of this together, I would date of the newly found crown cap as follows (from higher to lower likelihood):

For now, therefore, I consider this cap to have been created before 1924.